As you might know, I’m a sucker for independent watch brands. When we talk indies, MB&F isn’t just a ‘big player’. MB&F is Moby F’in Dick. (Read that in a Di Caprio/Belfort voice). MB&F’s founder Maximilian Büsser  is one of people I have wanted to feature here for a really long time.

Max Büsser is an incredibly interesting individual. Ironicly enough, he got interested in the watchindustry by trying to prove haute horlogery is all bullsh*t for his master thesis.

Max has had a carreer as senior manager at Jaeger Le-Coultre, and he later became CEO of Harry Winston, which he saved from bankrupcy and turned its revenue X10 in just a few years (don’t be shy Max, we all know you did). He left Harry Winston and decided to start one of the most interesting watchbrands currently available. Love it or hate it, you can’t claim MB&F isn’t interesting.

There are a lot of interviews with Max online, but all these interviews are about ‘Mr Büsser, founder of MB&F’, and never about ‘Max, the watch enthusiast’. Time to change that!

What’s the watch that gets the most wristtime lately?

Max: I have been wearing our HM6 Final Edition a lot lately. I love everything about the Space Pirate! The Final Edition in steel with the larger central sapphire dome and the grooves engraved into the sides is super cool, and the flying tourbillon and the winding rotors are mesmerizing. And it is so comfortable to wear. You might not expect it, but it’s an amazing daily watch. 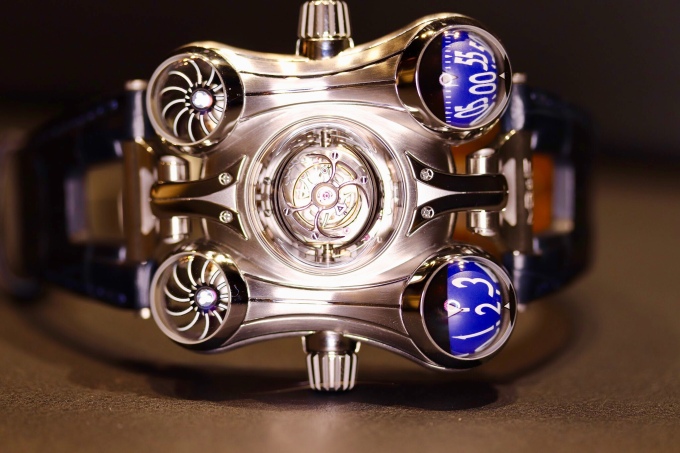 What’s a watch that means a lot to you?

Max: Our Horological Machine No4 Thunderbolt, because it was a creative tipping point for me. I was terrified no one would ever buy this piece as it was totally insane. To everyone’s surprise virtually none ever stayed at a retailer more than a couple of weeks during the four years we delivered them. It is then that I realized that I probably need to be very scared to create something truly worthwhile.

From another brand, there are many, but I will go for my Kari Voutilainen’s Vingt-8.  Each time I wear it, it reminds me of my friend Kari. It reminds me of his talent, of his dedication and of the hardships he had to go through to be able to create and develop his brand. And of course it reminds me of the great times we had working together. 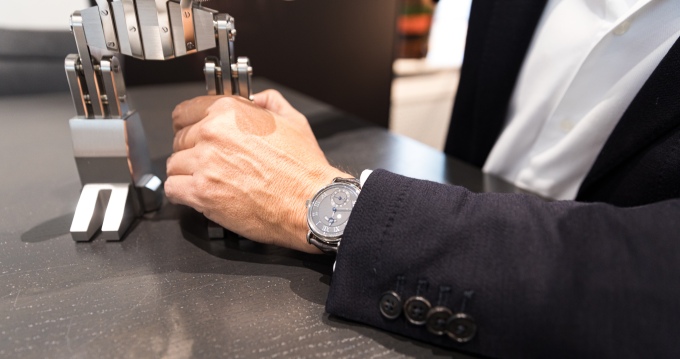 How did you get into watches?

Max: Thirty years ago, in the midst of my masters in micro-technology engineering, I wrote a thesis on why anyone would buy antiquated technology (a mechanical watch) at these incredibly high prices.  This was 1988, the middle of the quartz crisis, and the watch industry was dying. All the CEO’s I interviewed (AP, JLC, Breguet, VC, Mr. Gerald Genta himself,…) told me the same thing: “we know what we are doing is pointless, but it is so beautiful” and “if our industry disappears, generations of talent and information will disappear with it”. For the first time in my engineering studies, where everything is based of efficiency and numbers, someone was talking to me about beauty and humanity – and I got totally hooked.

What was your first watch?

Max: My first mechanical watch was a steel Ebel Chronograph (with the El Primero movement) I bought in 1990 with all my savings. I bought it to celebrate the fact that I was still alive after having a terrible army accident which should have killed me. No one knows how I got out of it alive. After six weeks in hospital and six weeks of revalidation, I hobbled on a bus with my whole upper body still in a cast to buy that watch. Luckily my left arm was ok and I could wear it immediately! I don’t wear my Ebel very often, but it means very much to me.

Max: Hmmm… that is a difficult question. I don’t think I have one. I am blessed in having one piece from each creator I have worked with (Voutilainen, Urwerk, Sarpaneva, Peter Speake-Marin and Alain Silberstein, for example) and every time I wear one, it allows me to think of my friend who created it. Sure there are other pieces I would love to wear, but nothing which would count as a grail. As a creator, the grail is always the next project I’m working on!